Git is a version-control system for tracking changes in computer files and coordinating work on those files among multiple people. It is primarily used for source-code management in software development, but it can be used to keep track of changes in any set of files.

When developers create something (an app, for example), they make constant changes to the code, releasing new versions up to and after the first official (non-beta) release.

Version control systems keep these revisions straight, storing the modifications in a central repository. This allows developers to easily collaborate, as they can download a new version of the software, make changes, and upload the newest revision. Every developer can see these new changes, download them, and contribute.

Github.com is where developers store their projects and network with like minded people. It provides a online platform to sync your code, visually track changes and collaborate with other developers. More information on features provided by github is here

A repository (usually abbreviated to “repo”) is a location where all the files for a particular project are stored. Each project has its own repo, and you can access it with a unique URL. 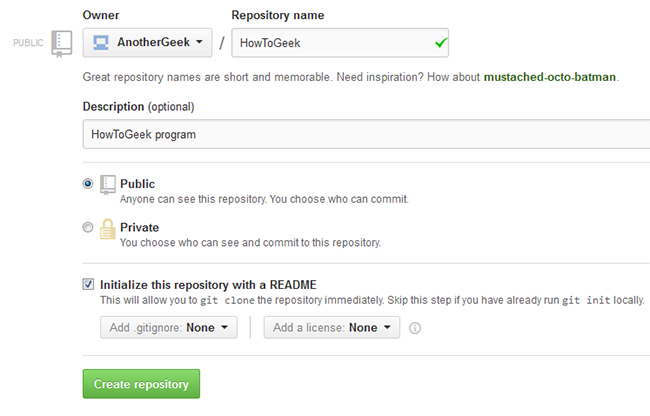 Create a Github account at https://github.com. Remember your usename and password. You will need is everytime you sync your local git repo with github.

Git and Github in a nutshell:

Getting started with a github repo

Go to https://github.com and login.

Create a new repository (aka repo) with a name for the project. In this example we will use YOUR-REPOSITORY as you repo name. Replace this with you own project name.

Now on your local machine, go to the directory under which you want this git project

For first time push you will be asked for username and password. After you have finished push run the following to remember your credentials for future use. Or else you will be asked to enter password everytime you push this repo.

First time git usage on a machine can ask you for commit username and email address with instructions of how to set them both. You will need to use the git config --global option to set them both

Now check online at https://github.com/YOUR-USERNAME/YOUR-REPOSITORY to see if the changes you made synced correctly.

Next time when when you start working on your project you should always pull before making any local changes. This will sync your local with remote and you will have the latest changes before you start.

GitHub and the command line:

For developers new to the command line, the GitHub Training team has put together a series of tutorials on Git commands to guide the way. Sometimes, a series of commands can paint a picture of how to use Git:

Example: Contribute to an existing repository

Example: Start a new repository and publish it to GitHub